UNESCO „Memory of the world“ 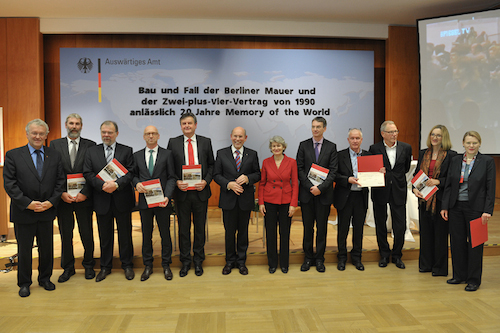 Representatives of the excellent archives and institutions after the act of surrender by Irina Bukova and Walter Hirche; Landesarchiv Berlin, Foto: Thomas Platow

Unique  film material from Berlin is on the  UNESCO „memory of the world“ register.

The program „Memory of the World“ was established in 1992 by the UN cultural organization UNESCO. It intends to preserve the documentary heritage of humankind.

Since 2011 some documents of the Landesarchiv Berlin are part of this World Heritage.

On 25th May 2011 the Director-General of UNESCO  Irina Bokova  followed the recommendation  of the International Advisory Committee and inscribed  15 historical documents on the register. These are relating to the construction and fall of the Berlin Wall,  the Two-Plus-Four-Treaty of 1990 and include film and fotographs picturing the fate of people in divided Berlin.

You can find more information in the flyer  32 minutes “Memory of the World”.

Theme by Anders Noren — Up ↑